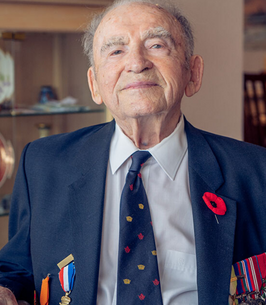 It is with deep sadness that we announce the passing of Alex Polowin on August 16th , in his 99th year. Alex was a decorated war hero and proud Canadian Veteran. He was predeceased by his wife Kathleen Petrie and his beloved son Howard Polowin. Loving Father to Cary (Annie), Sheldon, and father-in-law to Anne. Cherished Pappy to Aaron, Lily, Jesse and Meghan.  Brother to Frida and Gerry. He was predeceased by siblings Harold, David, Anne, Sheila, and Charles.

At 17, Alex enlisted in the Royal Canadian Navy. His father, an immigrant from Lithuania, could not read or write English so he didn’t realize the paper he was signing said that Alex was 18 and old enough to serve his country.

Alex’s bravery and service during the Second World War earned him many awards including the French Legion of Honour, the Atlantic Star, the Queen Elizabeth II Diamond Jubilee Medal, the Soviet Peace Medal, and the Order of Ushakov. He was awarded Canada’s Sovereign Medal for volunteerism by the Governor General of Canada for his exceptional volunteer work.

Alex proudly represented Canada at the 70 th D-Day celebrations at Juno Beach where he was humbly introduced to Queen Elizabeth II, Barack Obama, Francois Hollande, and Angela Merkel among other prominent world leaders.

It brought Alex a lot of joy to visit countless schools, retirement residences, and nursing homes to talk about his war experiences. For the last fifteen years, he has been a sought-after speaker for Historica Canada’s Memory Project. He was known for playing his harmonica for his audiences, just as he did on his naval ship during the War. He volunteered for over 25 years with the Tamir Foundation.

In recognition of all that Alex gave to his country and community, the City of Ottawa named a street after him in 2017. This will help preserve his legacy for generations to come.

He enjoyed daily visits from his best friend, the Honourable David Kilgour, until his passing earlier this year. Alex’s life was made richer by the warm visits, outings, and calls by his many friends and admirers.

A special thank you to the Ottawa Paramedics, the Ottawa Police Department and Sergeant Marc Levesque for their kindness and empathy.

Donations in Alex’s honour can be made to the Tamir Foundation.