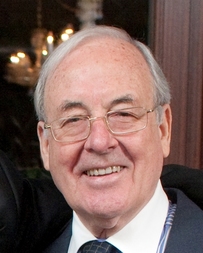 Memorial Candle Tribute From
Hulse, Playfair & McGarry
"We are honored to provide this Book of Memories to the family."
View full message >>>
In Memory of
Paul Damien
Dole
1941 - 2015
Menu

Died at home on November 19th, 2015 at 8:30am.
He was a man for others whose guiding philosophy was inspired by the French diplomat and dramatist Paul Claudel who wrote: “what value does life have if not to be given”. Paul was a generous heart who changed the lives of many people around the world. A bibliophile, he saw the creative genius in everyone. Born in Melbourne, Australia on May 27th 1941, Paul was a citizen of the world yet always Australian. Predeceased by his parents Lucy Ellen Dole (nee Green) and Herbert John Dole as well as his brother Peter Julian Eymard Dole. He will live on in the hearts of wife Patricia Mary Marsden-Dole and sons Gregory (Eliana) and Thomas (Nicole) and grandchildren Rennie, Marlow and Beatrix. Survived by brother David James (Gabrielle), uncle to Simone, Matthew, Anna and Tim as well as dear sister Hilary Mary Sullivan (Ross), and nieces Catherine and Angela. Survived as well by sister-in-law Vilma Dole and niece Lucy Ellen and brother-in-law Harold Marsden (Kathy) and Bronwen and Gaelen and god-daughter Koby Rogers Hall. We would like to thank Dr. Lisa Aldridge, CCAC staff and services and Father Vincent Pereira for their constant attention and concern for us during this difficult time.
Friends are invited to visit at the Central Chapel of Hulse, Playfair and McGarry, 315 McLeod Street (at O’Connor), Ottawa on Wednesday, November 25, from 3-6 p.m. Funeral Mass of Christian Burial at St. Theresa’s Roman Catholic Church, 95 Somerset Street, W., Ottawa, on Thursday, November 26 at 10:30 a.m. Reception will follow. In lieu of flowers, donations can be made to C.C.S.A.C., 507 Bank Street, Ottawa, ON., K2P 1Z5