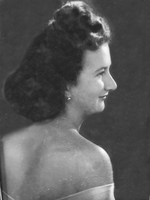 These words best describe our mother who rejoined her beloved Edgar on December 6, 2020 (their wedding anniversary) after declining into dementia slowly but steadily. She was 95.

Mom led a movie-worthy life, going from riches in Hungary to rags at DP camps to comfort in her new Canadian home, arriving first in Montreal, then Goose Bay, Labrador, on to Toronto and finally in Ottawa.

She was born into a prominent Hungarian family and had a wonderful and privileged youth complete with nannies, summer houses and rose gardens and a grandfather whom she adored.

She married Edgar, a dashing fighter pilot when she was 18 and they remained married for 68 years, until Edgar’s passing.

On her way to pick up their marriage license, the Church was bombed during WW2 and that began their unbelievable and courageous journey from war-torn Europe. Fleeing by foot to Austria, she was re-joined by Edgar after he was released from a POW camp.

She begged, borrowed and stole anything to get food; sometimes only horse biscuits. There are tales of trading guns which she hid under her skirt. She borrowed other people’s children for more successful begging at a bakery, where the baker’s wife felt sorry for such a young woman with so many children.

She delivered her first child, a boy, prematurely while on the run. He died and Edgar built a coffin; they buried him without a marker. During their continued escape, Edgar shielded Denise’s body from bullets as they hid in forests and on farms.

They settled in a DP camp in Austria with their second child, Denise Jr. There were many awful stories of daily life with nothing, but humorous ones too. Denise was eventually befriended by a Red Cross nurse who set them on a journey to England, ending up at Oxford University. Mom cooked & cleaned and learned English. She was already fluent in Hungarian, German, Russian and Polish. Edgar, the ace pilot, became gardener and chauffeur.

Years later, they arrived separately by ship to Halifax, Edgar first so that he could find a job and a place to live. A coin toss determined the destination of Montreal. Mom was exceedingly proud to be a new Canadian, and cut ties with her past, fully embracing the new culture. Then came two more daughters. While money was tight, Mom always prepared good food and sewed our clothes. She was a master seamstress taught young by her German nanny, knitted and crocheted beautiful items all her life until dementia stole her skills. No one ever left her home without a new hat.

In Montreal and Goose Bay, she was a homemaker. In Toronto, she was a translator at the airport. In Ottawa, she worked at the Bank of Canada until retirement. They loved their home in Orleans, where they were content and comfortable.

She was a stylish woman who believed in good manners, a clean house and etiquette. Hers was a storied life lived to the fullest; life and death, deprivation, hard work and reward. Successful because of fierce determination. Her biggest wish was that no one should ever have to live through a war.

Leaving to mourn are daughters Denise Jr. (Albert) of Ottawa, Cathy (Larry) of Denver and Judy (Mike, d. 2018) of Almonte.

Most grateful thanks to all the magnificent angels at Stoneridge Manor in Carleton Place, especially Shebin who spent hours keeping her hydrated and making sure she ate, cajoling and caring for her.

A funeral Mass will occur after Covid. If desired, donations to the Alzheimer Society are appreciated.