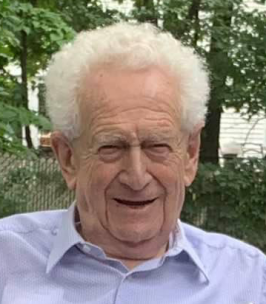 George Gara passed away peacefully on July 15 2022 at the age of 90. Left to mourn are his wife of 63 years Vera, his daughters Susan(Allan) and Judy (Jonathan), and his cherished and beloved grandchildren Daniel Markowitz, Mara Bosloy, and Rebecca Bosloy. He is predeceased by his mother Elsa, his father Dezso, and his brother Tom. He is survived by his brother Peter, his sister-in-laws Panni and Vera, and his nieces Mari, Eszter, and Judit (and their families).

He was born into a Jewish family on March 11 1932 in Budapest, Hungary. Rising antisemitism in Europe made life very difficult in Budapest. Fortunately, his family was able to survive the Holocaust. He went on to receive a Master of Electrical Engineering from the Technical University of Budapest.

In 1956, during the Hungarian Revolution, he and a cousin left on foot and made their way to Vienna. His cousin stayed in Austria but George was determined to continue further. With just his university degree on hand, he arrived in England and started work on his birthday in 1957. It was there he met his wife Vera, a fellow Holocaust survivor, at a New Year's Eve party,  and they were wed in 1959. Soon after came Susan (née 1961) and Judith (née 1964).

He continued even further west in 1970, accepting an offer from Bell Northern Research in Ottawa.

After a 25-year career, he retired. He continued doing consulting work, travelled with Vera, and played bridge and chess. He also loved watching different sports on TV, which is something he and his daughter Judy bonded over. Above all his favourite thing to do was spend time with all three of his grandchildren.

In lieu of flowers, donations may be made to Tamir, the Ottawa Kosher Food Bank, or a charity of your choice.

The graveside service will be held at Jewish Memorial Gardens, 6549 Herbert Corners in Greeley, ON on Sunday, July 17th at 1 p.m.

Please click here to view the livestream of the Graveside Service.