To share your memory on the wall of Hari Mohan Vijay, sign in using one of the following options:

Hari Mohan Vijay (Nee Keswani), beloved wife of Mohan Vijay, loving mother of Sangeeta (m. Stefan) and Sheela (m. Rob), adored Grammy of Samuel, Sasha, Rohan and Karun, passed away peacefully with her family by her side at home in Ottawa on September 2, 2020.

Hari was a brilliant immunologist who earned her Bachelor and Master of Science degrees in India. She went on to complete a Master of Science and Technology in Manchester, England, where she met and became the love of Mohan’s life in 1961; subsequently they moved to Birmingham, England, to complete further education, where Hari earned her Doctor of Philosophy. Hari and Mohan joyfully married in Winnipeg in 1968 and, welcomed their two daughters there before moving to Ottawa in 1974.

For all who knew Hari, she was a beautiful, humble and gentle soul. She gave and taught pure, unconditional love to her family. Despite difficult beginnings, having lost her own parents and four sisters at a young age, Hari drew strength from her grandmother and prized education above all else. She survived the Partition of India, travelled to England alone as a young woman to pursue higher education, and overcame hardships including poverty and frail health in her life to achieve her goals and provide a powerful example to others. She went on to transform the science of mold allergy with her life’s work, which was also her passion. Her dedication to her family never faltered; she tirelessly cooked delicious healthy meals for her family, sewed ballet costumes and dresses, attended class trips and dance classes, all while helping her daughters achieve dreams of their own. Throughout all of this she managed to develop several scientific patents along with publication of 222 scientific papers, earning her the distinction of an Inventor’s Award from Health Canada. After a distinguished 37 years career with Health Canada, she received a Certificate of Commendation from Prime Minister Harper upon her retirement. She then went on to form her own research company, VLN Biotech, which she led until 6 months before her passing.

Hari’s wonderful qualities are too many to name here. Perhaps the one that touched the most people was her gentle encouragement. Hari believed that anyone could achieve their dreams, no matter where they were at on their journey. Beyond helping countless people advance in their careers, she unfailingly supported her husband’s research company, VLN Advanced Technologies Inc. and never stopped supporting her children’s and grandchildren’s aspirations in any way that she could. Her incredible generosity has helped to improve countless lives through her philanthropic donations to numerous organizations, including the Dalit Freedom Network, the Make A Wish Foundation, Foster Parents Plan, and Propeller Dance Company.

Perhaps a little-known side of Hari was her mischievous sense of humour. She was often the first to stimulate giggles in those around her.

Hari was a gift to all who had the privilege of knowing her. She will be deeply missed. While her loss leaves a profound void in many lives, her quiet strength, wisdom and grace remain her wonderful legacy.

Receive notifications about information and event scheduling for Hari Mohan

We encourage you to share your most beloved memories of Hari Mohan here, so that the family and other loved ones can always see it. You can upload cherished photographs, or share your favorite stories, and can even comment on those shared by others.

Posted Sep 12, 2020 at 08:49pm
I was saddened to hear of Hari's passing. I consider the three years I worked with Hari as among the happiest of my professional life. Hari was a gentle and considerate soul who appeared in fragile health at times, but also possessed a fiery determination to achieve her goals in science. We had a mutual respect for each other's knowledge and skills, and accomplished the cloning of Alt a 1 allergen, which Hari seemed to regard as one of her proudest achievements. Hari always spoke lovingly of her husband Mohan and daughters Sangeeta and Sheela. I now express my deepest sympathies to them for their loss.
Comment Share
Share via:
MH

Posted Sep 10, 2020 at 03:33pm
My sincerest condolences on the passing of your beautiful wife Hari. My warmest sympathies go out to you and your daughters and grand children who will miss her a lot. May God give them patience and strength during this difficult time. I am sure that the whole family will keep her in their hearts forever and that her memory will bring them joy and inspiration. She will be in my prayers for God’s mercy, and you will be in my prayers for strength and patience. May you find the comfort and peace in your memories and forever lasting love. I met Hari once and was so impressed by her cheerfulness, kindness, and warmth. She invited a whole conference (filling a few busses) to her house and prepared the place and most of the amazing food. On the way out at the end of the evening, she shook hands and smiled from her heart to everyone and I still remember those beautiful smiles and those eyes who radiated intelligence, compassion, and friendliness. Reading her story brought tears to my eyes and I wished that I knew her more, in a way, I did through you Mohan as she indeed reflected on you. May God reward her with the highest levels of honor. Mohamed Hashish
Comment Share
Share via:
R

Posted Sep 10, 2020 at 10:15am
Our association with the Vijay family began in 1968 in Winnipeg through the University of Manitoba computer department, the common place to meet strangers interested in using computer for their research and using the large elevator to go from ground floor to the sixth floor where IBM360 was installed. Mohan was always eager to welcome strangers to his beautiful spacious penthouse apartment on Carleton street.
And when you reach Mohan’s home, you meet even more friendly person – Hari. We became brother and sister in our first meeting, and after that I was an invitee in every party they had during my bachelor stay in Winnipeg. Together with them, I saw the moon landing by Armstrong on their big colour TV screen on July 16, 1969.
When we moved to Ottawa in 1978 with the help of Mohan getting me a job at NRC, Vijay’s family was the only one we knew in Ottawa. Hari made us feel always at home. Rashmi felt like she found an older sister, so loving and caring. And when our son was born soon after our moving to Ottawa, Hari and her family became our extended family to celebrate birthdays, Halloween, Christmas, etc. together. And going for outings together. It was always lovely to be with Hari, our dear sister Hari, her beautiful daughters Sangeeta and Sheila and Mohan.

We will miss you dear sister Hari. You will remain smiling in our fondest memories. May your soul rest in peace.

I'm very sorry to hear about Hari's passing and your family's loss. Although I only had the honour to meet and speak with her on a few occasions, her wisdom, grace, sense of humour and kindness were immediately evident. I can only wish that the opportunity for those occasions had been more frequent. Love and strength to you, to your and Hari's families and friends.
Comment Share
Share via:
SS

Posted Sep 09, 2020 at 03:10pm
Dear Hari,
Your kind and humble heart touched the lives of many of us. I will cherish your memories. My deepest sympathies foer your family. May your spirit rest in peace.
Serdal Sevinc
Comment Share
Share via: 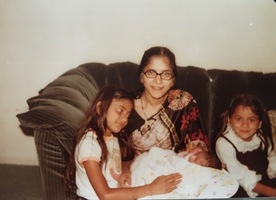