To share your memory on the wall of Marcia Almey, sign in using one of the following options:

Receive notifications about information and event scheduling for Marcia

We encourage you to share your most beloved memories of Marcia here, so that the family and other loved ones can always see it. You can upload cherished photographs, or share your favorite stories, and can even comment on those shared by others.

Posted Oct 02, 2020 at 08:54pm
My deepest sympathy to the family on the unexpected passing of Marcia. She was a vibrant, interesting and intelligent woman. Despite COVID, we still had lunch on the patio at Irene's on July 22. It was the last time that I saw her. Though we both worked at Statistics Canada and have mutual friends, it was the love of films that brought us together. I saw her at the Bytowne theatre a few years ago and asked her if she was a member of the Ottawa Film Society (OFS) as she looked familiar and I was on the OFS Board. She said that she had been a member but not now. When she said that she had worked at STC then I knew where I had seen her. And we became friends ever since. I am going to miss her and our conversations. Rochelle Handelman
Comment Share
Share via:
SB

Posted Oct 01, 2020 at 10:15am
I can’t remember if I met Marcia at STC or in line at the once monthly Vintages wine release at the Dalhousie store.
It doesn’t matter because before long she was mentoring me in all things to do with wine. It would have started in the mid 80’s.
Soon after I was the occasional afternoon recipient of a visit to my office where she would produce a small glass bottle of whatever she hadn’t finished the previous evening. Together we would sample an ounce or two of one of her well researched purchases for her extensive cellar. These impromptu tastings went on for years. We did research together and she would always have a recommendation for me for the next Vintages release.
After her retirement we saw each other less frequently and like many work friendships we eventually drifted apart.
My sincere condolences to her family. She was always very generous and kind to me and I give her full credit for my continued interest in wine as a hobby.
Comment Share
Share via:
J

Posted Oct 01, 2020 at 08:41am
I am sorry to hear of Marcia’s passing. We worked together at Statistics Canada for several years, and I remember her as an interesting, engaged and highly knowledgeable colleague. My sympathies to her family and friends.

Posted Sep 30, 2020 at 11:12am
I will always remember Marcia as an interesting, intelligent and vibrant woman with a true sense of style. I’ll miss our lunches together and will raise a glass in her memory.

Rest In Peace dear friend, you’ll not be forgotten!

Posted Sep 30, 2020 at 08:01am
We are so sorry for the loss of Marcia. She was a unique individual who enjoyed being with family and friends. She was most happy to share her loves of music, art, and literature. She will be missed. 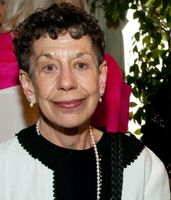