Obituary for Marion May Griffin (Mills) 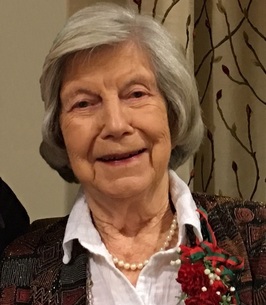 Born on September 11, 1924, in Toronto, Ontario, she was the daughter of the late James Mills and the late Cicely Annita Mills (Pereira).

Marion was predeceased by her beloved Gordon in January, 2015 after 69 years of marriage. They raised seven children in Montreal, Québec and Oakville, Ontario.

Marion was predeceased by sister Audrey Fox of Barrie, and mourned by sister, Patricia Murphy of Alliston. She was the adored grandmother of Trevor Griffin (Jennifer) of Peterborough; Ryan Griffin (Erin) of Port Elgin; Baka Serkoukou (Less) of Montreal; Juba Serkoukou of Montreal; Holly Janser (Travis) of Sault Sainte Marie; Heather Janser (Kana) of Sault Sainte Marie; and four great grandchildren Haley and Rowan Griffin of Peterborough and Sophie and Daniel Griffin of Port Elgin. She will be missed by many nieces and nephews.

Many thanks to the wonderful staff and management at Riverpath and Maplewood Retirement Residences for their kind and gentle care.

Somehow, while raising seven children, Marion found time to devote to many creative activities. She was a talented potter, knitter, and quilter. She and Gordon took many adventurous trips after retirement. Trips to Nunavut, white water rafting on the Tatshenshini and the upper Fraser Rivers, camping at Ellesmere Island and Bathurst Inlet; a cruise to the North West Passage, plus trips to Ireland, Wales, Scotland and England. One spring, when they were in their early 70’s, they even upset their canoe in a fast-flowing river! They have inspired us all.

Friends are invited to visit at the Central Chapel of Hulse, Playfair & McGarry, 315 McLeod Street (at O'Connor), Ottawa on Sunday August 14, 2022 from 1:30 pm until the time of the Celebration of Life in the Chapel at 2:30 pm. A reception will follow.

In lieu of flowers, donations to the Friends of Algonquin Park, the Dementia Society of Ottawa and Renfrew County, or a charity of your choice would be greatly appreciated.