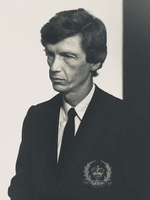 Michael Macklem was born in Toronto on the twelfth of July 1928, the son of Hedley Macklem and Mary Kirkpatrick, and brother to Douglas and John Martin. He spent his early years at Upper Canada College, at the prep and the upper school, before going on to study English literature at Trinity College in the University of Toronto. In 1950 he graduated with the highest average in the history of the university, and won a full scholarship to Princeton, where he completed both an AM and a PhD in only three years. His thesis was published as The Anatomy of the World: Relations Between Natural and Moral Law from Donne to Pope. He went on to teach at Yale from 1954 to 1955, before deciding he didn’t want to live in the United States—the beginning of a long career as a Canadian nationalist.

In Ottawa, he signed on as a writer for the new Encyclopedia Canadiana, a landmark publication for a country looking to tell its own story in its own voice, and once the encyclopedia was published went on to become part of the early development of the Humanities Research Council of Canada. In the nineteen-sixties he wrote Liberty and the Holy City: The Idea of Freedom in English History, followed by God Have Mercy: The Life of John Fisher of Rochester, a very successful biography of the sixteenth-century Bishop of Rochester who was executed, like his friend Thomas More, for refusing to admit that Henry VIII could become head of the church in England.

In 1967 with his wife Anne Hardy, Michael founded Oberon Press, one of the first of the new wave of independent Canadian publishing houses devoted to giving Canadians books of their own. Over the next fifty years, Oberon published the work of people like Raymond Souster, David Adams Richards, Wayne Johnston, Marie-Claire Blais, David Helwig, Elizabeth Brewster and W.P. Kinsella, whose native and baseball stories—later made into the ﬁlms Dance Me Outside and Field of Dreams—made his name a household word. The company became generally recognized as Canada’s leading publisher of short ﬁction. Altogether Oberon published more than seven hundred different titles—many of them typeset in its own hot-metal printshop—and its books won almost every prize in the country, including the Governor General’s Award. In 2006 Michael Macklem was awarded the Order of Canada in recognition of his work with the press.

For most of Oberon’s fifty years, Michael and Anne spent two months of every fall travelling thousands of miles by car from one coast of Canada to the other, visiting every major bookstore and library on their route to show off the new titles and take orders. Out of those road trips was born the national restaurant guide Where to Eat in Canada, edited by Anne Hardy, which sold almost 200,000 copies through fifty annual editions from 1971 to 2020. Its independent and impartial reviews—the book’s watchword was “Nobody can buy his way into this guide and nobody can buy his way out”—contributed more than any other single publication to the development of the restaurant industry we know in Canada today.

Away from the publishing company, Michael’s great passion was for Lake Muskoka, where he spent 92 summers, always working, always building—cottages, boathouses, docks, decks, even furniture. He planted thousands of pine trees and spent the rest of his life watering them. Today Michael’s acres in the middle of the lake are some of the greenest and most beautiful in Muskoka. He had his parents’ antique mahogany launches painstakingly restored, and was elated when they won prizes. In the winter he and Anne skied in the Alps and sailed in the Caribbean, and every spring they visited England, over and over again, where Michael loved climbing in the Lake District as much as the music, art, theatres and restaurants of London.

He had an enormous enthusiasm for everything he found beautiful—from boats and water and trees to paintings, porcelain and the works of George Frederick Handel. And for the world of books and ideas—he read every spare minute of the final years of his life. Wherever he was, he was always involved—the conversations carried by his energy, his interest, his understanding, his delighted laughter. But his greatest love was for his family, for his wife Anne, to whom he was married for more than seventy years, for his son Timothy and daughter-in-law Gail, for his son Nicholas and daughter-in-law Dilshad, and for his three grandchildren, Elizabeth, Oliver and John. His last word, just before his death, was the name of his wife, Anne.