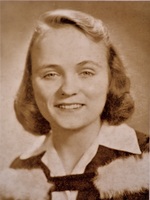 Naomi Edna Margaret Kuhn (née Naomi Kirkwood) died in the Montfort Hospital in Ottawa on April 3, 2022 of complications brought on by a fall.

Naomi will be greatly missed by all who knew her. She was born on March 30, 1928 to Mossie May Kirkwood and William Kirkwood, both University of Toronto professors. She leaves behind her sons Roland (Susan) and Oliver (Tulimah), her daughter Nicola (Neil), and her grandchildren Alexander and Thomas Kuhn, Sophia and William Kuhn, and Holly, Josh, and Jesse Janna. Among the many other family members who will mourn her passing are her younger brother John Kirkwood, her sister-in-law Diana Kirkwood, her niece by marriage Dagmar Forget, and her cousin Maria Kaiser. She will also be mourned by her close friend in later years, Joanne Maisonneuve. Naomi was predeceased by her husband Tillo Kuhn, her son Christopher Kuhn, her older brother David Kirkwood, and one of her favourite cousins, Geoffrey Adams.

The sweetness and generosity of Naomi’s nature were legendary, along with her quiet sense of humour (not always quiet: she was subject to occasional giggling fits). She grew up on the University of Toronto campus, attending Mrs. Underhill’s famous primary school, Bishop Strachan School, and then Trinity College. After graduating with a BA in 1949, she spent a year working as an au pair for the aristocratic Sforza family, descendants of the Dukes of Milan, and learned to speak fluent Italian. On her return to Toronto, she attended dances held by southern Italian immigrants, passing herself off as northern Italian to explain her slight Anglo accent in the language. In the summer of 1955, she rented a cottage at Gleneagle on the Gatineau River with friends. There, she met Tillo Kuhn, a recent German immigrant who was completing his PhD in Economics from McGill University.

Her marriage to Tillo in 1956 began a new, adventurous phase in her life. Together with him and their children, she lived in California, Washington DC, Greece, Turkey, and Kenya, as well as Toronto and Ottawa. Her linguistic skills proved useful. After she married Tillo, she was able to surprise him by revealing she had studied German at university, enabling her to speak to their children and Tillo’s relatives in the language. At various periods, she spoke not only fluent Italian, German, French, and modern Greek, but also smatterings of Spanish, Turkish, and Swahili. She was a quiet woman with an active mind:  she loved reading, cryptic crosswords, and jigsaw puzzles. Some of her happiest moments were spent chatting and playing games with her family at the cottage her parents had built in the 1930s on Lake Rosseau, Ontario.

In her later years, she worked for Agriculture Canada while living in the Gatineau River home she and Tillo had built on the exact property where they first met. After retiring she moved to downtown Ottawa, volunteering several hours a week for the Ottawa Food Bank and Meals on Wheels. She was a loyal supporter of Bishop Strachan School, Trinity College, Christ Church Cathedral in Ottawa, and several charities. The world is a poorer place without her.

Her family thanks the staff at the Rockcliffe Retirement Residence and the Montfort Hospital for the excellent care Naomi received at both places. A memorial service is planned on May 23, 2022 at Christ Church Cathedral.