To share your memory on the wall of James Bruce Yates, sign in using one of the following options:

Bruce's easy going, friendly, always open personality garnered friendships wherever he was, be it in Toronto with golf buddies, Dave, Al, Mike, Dave, Ron and so many other. And of course his work colleagues from across the country, especially Dwayne and Marc.

He was a loving brother to Ross, Kevin and Sandra, and enjoyed time with his many nieces and nephews.
At his best, Bruce was a loving, caring, and fun person to be around. He would attend all of his son James’ games when he was growing up, and was very close with his daughter Catherine. He loved his wife Maureen, and although divorced, they always enjoyed each other’s company and spent time together talking about James and his future with Christina and his new grandson Dallas.

He was especially proud to be asked to be James' best man at James and Christina's recent wedding and to hold Dallas during the ceremony.

Although he had his struggles, his love for his family and friends never wavered. He'll really be missed but will always bring a smile to someone's face when chatting about hockey, golf and Seinfeld.

Due to the restrictions caused by Covid, a Celebration of Bruce's Life will be held at a later date.

Any donations may be forwarded to CHEO in Bruce's name in his daughter Catherine's memory.
Read Less

Receive notifications about information and event scheduling for James Bruce

We encourage you to share your most beloved memories of James Bruce here, so that the family and other loved ones can always see it. You can upload cherished photographs, or share your favorite stories, and can even comment on those shared by others.

Posted Oct 16, 2020 at 01:10pm
I am so deeply sorry for your loss.
Some years ago, as a newcomer to Ottawa, I spent many lovely evenings with your family. Bruce was always such a warm,
welcoming and hospitable person. His bright infectious smile and his friendly manner shone so bright.
I have many great memories of Bruce. When I was going through a difficult time, Bruce showed me true empathy and compassion but, best of all, he offered thoughtful advice with his special brand of humour.

Maureen, James, Christina and Dallas,
May your happiest memories of Bruce bring you comfort and may his eternal love for you fill your hearts and give you strength in the days ahead.

Terribly sorry to hear of Bruce's passing. I'm happy we had the chance to see him splashing around with Dallas in the pool. Sending you our thoughts during this difficult time.

Please accept my sincere condolences on the loss of Bruce. I know you both, as well as Christina, Dallas and Bruce’s many friends and family members (and extended families) will continue to miss and remember him going forward.

I remember happy meetings with Bruce and the rest of the family at several Christmas and Thanksgiving celebrations at Maureen’s home – and watching Bruce’s warm interactions with his Father-In-Law, Alexander Francis Philbin; a long friendship that continued to the time of Alexander’s death.

I know that Bruce was a wonderful family man and sincerely loved both Catherine (Daughter) and James. He was very proud of James’ accomplishments and took great joy in being the Best Man at James and Christina’s Wedding in August – and carrying Dallas around with obvious delight to meet his extended family and friends.

James especially, I hope you will be able to take comfort in your good memories and the important role you had in making your Dad’s life meaningful – no doubt he will be watching over you in the future and he will always be a part of the man you have become.

My heart breaks for you all.
I hope that you all find comfort in the memories you all shared.
He will be missed but remember how much he loved you all.
James he was so proud of you and the man you have become.
May he now rest in peace.
Annette & Bernie
Comment Share
Share via:
JN

Posted Oct 08, 2020 at 01:03pm
Maureen what a beautiful tribute to Bruce. It was just him and so nicely worded.
He looked so happy with Dallas a great memory for you and James and such a special reference to you and Catherine. 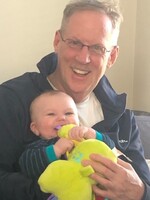 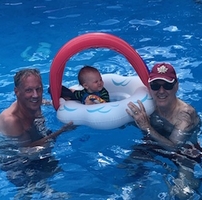 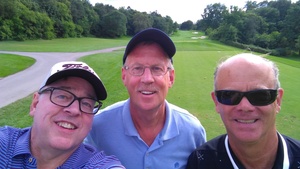 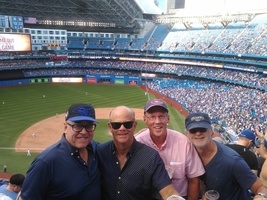